Acromegaly and the Skull Expansion Hypothesis

Some people claim that acromegaly disproves my skull expansion hypothesis for hair loss.

The skull expansion theory states that hair loss from androgenetic alopecia is caused by the growth of certain skull bones. And since the disease acromegaly can also involve skull bone growth, therein lies a possible connection.

This apparent connection then leads some people to believe that skull bone growth can't be the cause of hair loss because there are examples of acromegaly where no hair loss has developed (e.g., the famous French wrestler, André Roussimoff aka "André the Giant" - see photos below). 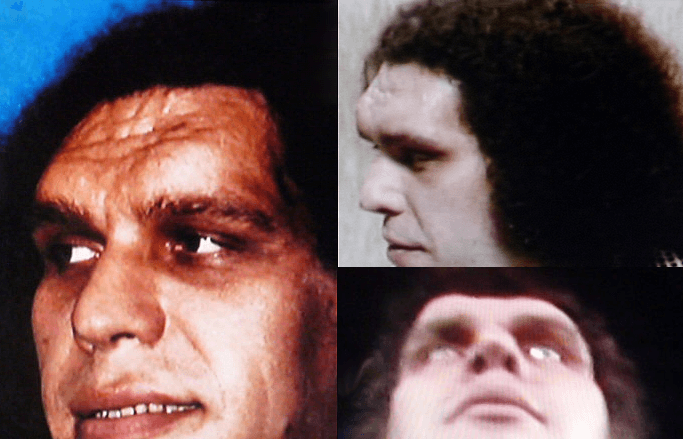 However, comparing acromegaly and skull expansion like this is a mistake, as you'll see below.

First, a few facts about this condition:

Acromegaly is the medical term for a rare, non-genetic disease which can affect some adults, usually in middle-age.

Cause - Typically, acromegaly is caused by an excess of human growth hormone (HGH) produced by a non-cancerous tumor of the pituitary gland in the brain.

Treatment - Surgery is usually performed to remove the tumor.

Symptoms - The main symptoms of acromegaly include enlargement of the hands and feet. But enlargement can also develop in the face, affecting the lower jaw, lips, nose and forehead (frontal bossing).

Acromegaly vs Gigantism - If children produce too much HGH, the bones of their arms and legs also grow. This can increase their height dramatically and is called gigantism. Acromegaly does not affect the arm and leg bones in adults, so there's no change in height (1). Note: André the Giant (mentioned above) was affected by both gigantism (he grew to 7’ 4") and acromegaly.

From the pictures of acromegaly above, you can clearly see the very pronounced and protruding forehead often associated with this condition, especially in the brow area. This extreme growth is called frontal bossing. And the bone which underlies this region is the frontal bone.

Clearly, the photos above show that someone with extreme bone growth in the forehead caused by acromegaly can still have strong hair growth at the front.

So, does this prove the skull expansion theory wrong?

No. The following three points explain why:

Hair loss develops within a region of the scalp which lies directly above the frontal and parietal bones.

Parietal bone growth from the parietal eminence region causes hair loss at the back of the head rising up to the crown (see parietal bone picture below). This is nowhere near the region of the skull affected by acromegaly. 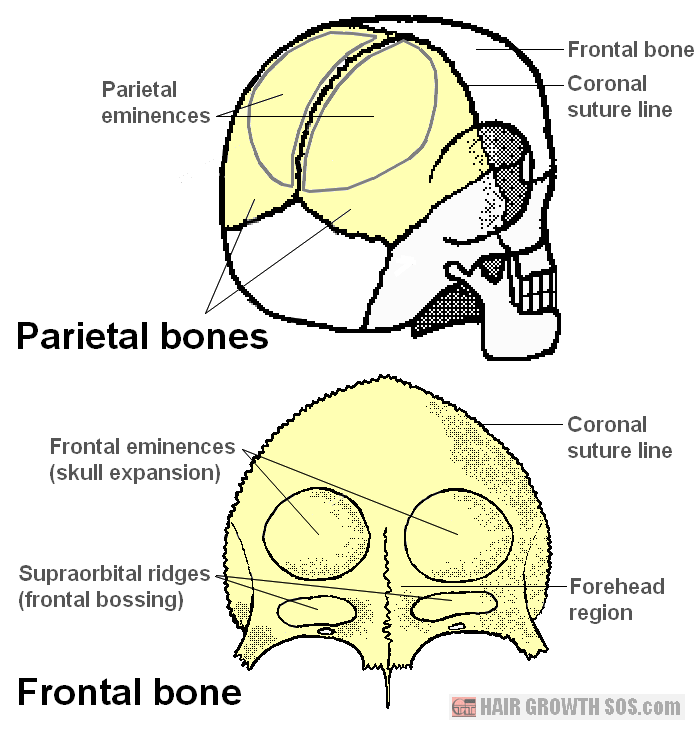 However, acromegaly doesn't affect the whole frontal bone. This disease seems to selectively act on certain areas of the body (mostly the hands and feet) and only appears to affect the face up to and including the brow ridge (i.e., the chin/lower jaw, lips, nose and forehead).

The region of the frontal bone where skull expansion and hair loss develop is untouched by acromegaly.

So, for acromegaly to provide a strong case against the skull expansion theory, it would really need to affect the skull across the whole male pattern baldness region (which it does not).

In the case of André the Giant, it looks like he had the typical forehead shape* of someone who should keep their hair at the front anyway (i.e., flat and broad).

But, in other cases of acromegaly where the forehead shape has the characteristics* for hair loss (e.g., a rounded forehead), a receding hairline will still develop in the same way as it would for anyone else.

* The skull shape characteristics of those who lose their hair at the front and those who keep their hair, can be seen on my receding hairline page.

I think a lot of people probably fail to grasp the true importance of skull shape. Instead, perhaps they simply focus on the most basic concept of skull expansion: skull bone growth causes hair loss.

Quite apart from acromegaly and androgenetic alopecia being two completely different conditions, the extent to which each one affects the general population is also very different.

Androgenetic alopecia is a very common condition. It affects about 80% of Caucasian men and up to 50% of women (2).

So, even if acromegaly did provide a valid argument against the skull expansion theory, this disease is so rare that any such example could only really be seen as an exception to the rule anyway.

To raise a strong case against the skull expansion theory, a widely-applicable aspect of hair loss development (i.e., by androgenetic alopecia) would need to be involved.

Clearly then, it's important to keep things in perspective.

It's also important to get things right…

The Importance of Getting it Right

Finding articles on the Internet supportive of my skull expansion theory is obviously very helpful.

Similarly, articles which challenge my theory based on scientific facts are also helpful because they raise interest in the subject and encourage relevant debate (and also prompt me to write articles like this one!).

But, articles which wrongly dismiss skull expansion based simply on the opinion of, say, a medically trained professional, or perhaps on research which is at best, incomplete, or at worst, incorrect, can be very damaging. Clearly, if such a website should have a large audience, then that's a lot of people who are going to get false information.

All websites, especially those which do have a large audience and a good reputation to protect, obviously have a responsibility to conduct thorough research and get their facts straight.

The basic principles behind the skull expansion theory are actually quite straightforward, but there is some degree of complexity. So, if someone didn't fully read about the skull expansion process, or perhaps not completely understand it, then they might get a bit confused. Even doctors can make mistakes…

For example, a doctor from the Belgravia Centre (a leading hair loss clinic in the UK) suggested that skull expansion cannot develop in adults because acromegaly is the only condition which would cause the bones to grow in adulthood. But that's not true. A news article released in 2007 by Duke University states that: "the bones in the human skull continue to grow as people age." (3)

The issue with acromegaly is that this disease can involve frontal bone growth (causing a protruding forehead in adults to develop). And, therein lies an obvious connection, so some people then refer to this frontal bossing as "skull expansion".

But you now know that bone growth from acromegaly and the skull expansion process which causes hair loss are totally separate from each other. And, as such, it would be inappropriate to make any connection between the two.

Learn about the skull expansion process.

"Hey Paul, I'd just like to say that your website is terrific and really professional. After reading everything, I definitely agree with the skull expansion theory. Everything adds up like pieces in a puzzle."

"Wow - incredible. However you pioneered the skull expansion concept and concluded all of these findings and treatments is a feat of a lifetime in itself. This is revolutionary scientific study without a doubt."

"Hi Paul, I was experiencing some relatively bad hair loss a couple of years ago. Together with altering my diet and taking supplements such as saw palmetto and curcumin, and following the exercises in your ebook, I have been able to regain much of the hair that I lost. So I can't be 100% sure that these exercises worked but I have a feeling that they played an important part in getting my scalp and hair healthy again. Many thanks."