Why Do Bald Spots and patches Develop at the Back of the Head? 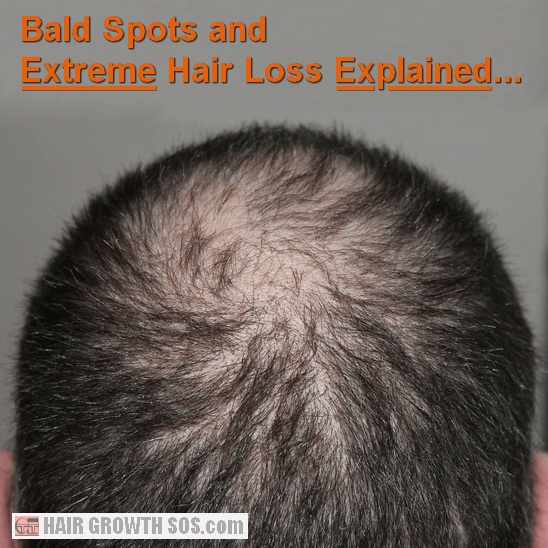 Whether or not you develop a small bald spot or a big bald patch at the back of your head all depends on the shape of your skull.

This page gives the skull shape characteristics that cause baldness (from androgenetic alopecia) at the back of the head.

It also explains how the extent of skull expansion (skull bone growth) determines how much hair you're likely to lose, including extreme cases where near total baldness can quickly develop.

If you take a look at the pictures below, you can see that two parietal bones and one frontal bone underlie the scalp.

You can also see that there’s an area on each parietal bone called the parietal eminence, which overlaps very well with the hair loss region. This is where hair thinning, hair loss and baldness at the back of the head originates. 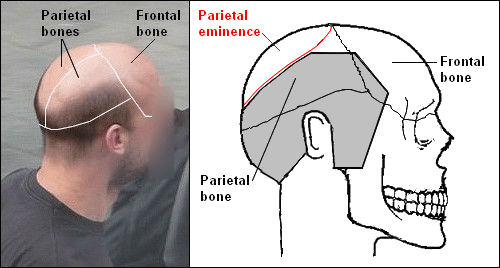 Obviously this means that more bone growth leads to more hair loss. So, if parietal bone growth is minimal, a small bald spot might slowly start to develop. But if the parietal bones keep growing, any bald spot or patch is likely to be much larger and develop a lot faster.

How Does Skull Shape Fit in With All This?

There are several skull shape characteristics which will influence whether or not the parietal bones grow – too many to fully explain in this article. However, various degrees of curvature play a large part.

In the previous page, it was explained how a "square" shape to the skull at the front will usually prevent receding hairlines and frontal baldness developing in men and women. And the same largely applies at the back. A square shape often means that no baldness will develop here as well.

If the skull is square at the front, it’s quite often square at the back too. And this symmetry gives a somewhat cubic, or box shape, to the skull. In the photos below, you can see that the skull shapes appear relatively square or box shaped. And there's no hair loss at all.

However, not many people have a really square shape at the back of the head. And that’s why so many men suffer baldness in this region.

In this next set of photos, you can see that extensive baldness has developed in these men, and they all have a somewhat rounded or domed skull shape rather than box shape. This dome shape is what causes all that hair loss to develop.

Having a square shape at the back of the head is probably not as critical for women as it is for men. That’s because women produce lower levels of the hormone dihydrotestosterone (DHT) (1) which largely drives the skull expansion process.

Nevertheless, the typical skull shape in women is quite often square or box shaped anyway, as you can see from the photos below.

Unlike most men, it’s very rare for a woman to develop severe hair loss (i.e., bald spots at the back or receding temples at the front). And the reason why was explained on the previous page (see section: Why women don't get receding temples).

However, sometimes extreme skull expansion and hair loss does develop, as the photos below strongly suggest. 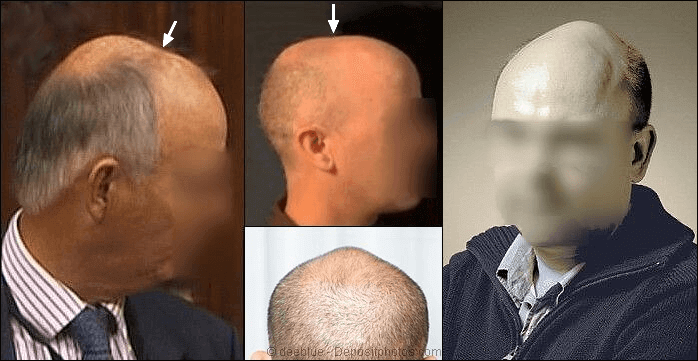 Whether or not extreme skull expansion develops all depends on the shape of the skull and the "growth potential" it has.

High DHT levels (or high sensitivity to DHT) can factor in too. But, since DHT levels can also be high in men who suffer no hair loss at all, obviously DHT on its own is not the most important issue.

Men who have a skull shape with a high growth potential could start developing hair loss at both the back and front as early as puberty (3), and become totally bald by the age of 30.

Others might not start losing their hair until much later on in life, and do so to a lesser extent or at a slower rate (4). It all depends on skull shape and its growth potential.

Bald spot development can also be associated with another type of hair loss called alopecia areata.

However, this extreme type of hair loss is completely unrelated to the skull expansion process and the hair loss it creates.

Instead, it tends to form bald spots and patches very rapidly (even overnight) and can do so anywhere on the scalp.

So, even if skull expansion and hair loss do develop quite quickly, it’s unlikely to be anywhere near as fast as it is for someone with alopecia areata.

Finally, androgenetic alopecia is far more common than alopecia areata, and so is much more likely to be the reason for bald spots and patches developing in most people.

You now know why baldness at the back of the head develops. There are exceptions to this "square" shape link between skull shape and hair loss at the back, but generally they do seem to correlate extremely well.

There’s also more to hair loss development at the back than described in this article. Only a simplified look has been given.

On the final page, I’ll review this whole section by asking some important hair loss questions. And, as you’ll see, only skull expansion can provide all the answers.

Read previous page? Why do receding hairlines develop in men but not women?