So, given this complexity, perhaps it's not really surprising that the underlying mechanism that causes this type of hair loss has eluded scientists for years, and many areas of research have been pursued.

This article brings together two studies, and reveals that DNA damage may result from excess dihydrotestosterone levels in the hair follicle, and the subsequent response of one gene that can then cause hair follicle cell death. 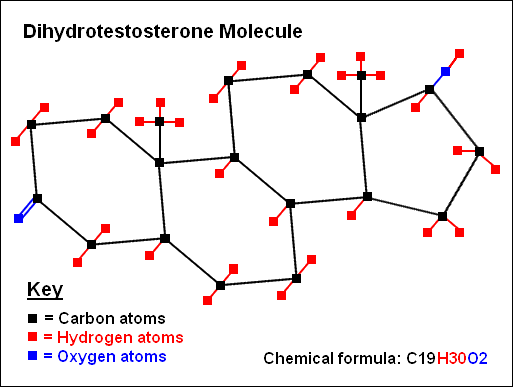 The first study (1) involved the human dickkopf 1 (hDkk-1) gene, and reported a number of interesting observations and findings:

1. hDkk-1 is secreted from dermal papilla* cells in response to dihydrotestosterone.

2. hDKK-1 levels are higher in the hair loss region of the scalp in those with androgenetic alopecia.

4. Measurement of DNA showed that ORS cells undergo cell death in the presence of DHT.

* The dermal papilla and outer root sheath are shown in the diagram below. 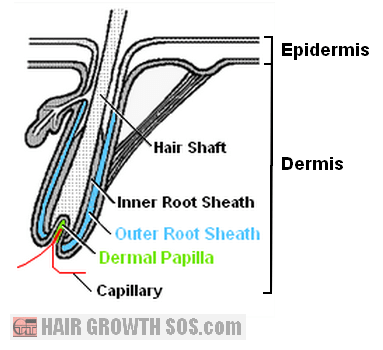 The dermal papilla is a cluster of specialized cells which play a key role in the regulation of the hair growth cycle.

All these findings suggest that hDKK-1 is involved in the hair loss process.

In the second study (2), it was reported that the hDkk-1 gene (and the hDkk-1 protein it forms) respond to DNA damage by sensitizing tumor cells to cell death.

It also states that:

What I find most interesting about this study is the link between hDkk-1 and cancer.

Here's the reason why:

A Connection with Cancer?

DHT and androgen receptors have both been linked to prostate cancer (3).

And given that both DHT (4) and androgen receptor (5) levels are higher within hair follicles in the affected region of the scalp in people who suffer hair loss, it seems likely to me that the high DHT concentrations in ORS cells (reported in the first study) causes DNA damage.

DKK-1 levels then increase and cause cell death (i.e., the same response the body gives to prevent tumor development).

What Does All This Mean?

Essentially, the increased expression (upregulation) of the hDkk-1 gene is a response by the body to excessive DHT levels.

Very high concentrations of DHT can cause DNA damage. And the body will automatically react to this by causing ORS cell death via hDKK-1 upregulation.

The discussion section of the first study ends with:

"However, it still remains to be investigated whether our observations translate into a significant role for DKK-1 in the decreased growth of the hair follicle and ultimately in androgenetic alopecia."

I think DKK-1 probably does further decrease the growth of the hair follicle, but I also think it's important to look at the bigger picture:

Why Are Dihydrotestosterone Levels So High in the First Place?

As already stated, for those who suffer androgenetic alopecia, DHT levels in the hair loss region are higher than they are in the rest of the scalp.

Surely an external influence beyond the follicle must also be involved in this accumulation of DHT?

The current theory for hair loss simply states that follicles in the affected region of the scalp have higher androgen receptor gene expression and 5-alpha reductase levels than in the non-affected region.

But the skull expansion theory states that androgen receptor gene expression and higher levels of 5-alpha reductase and DHT in hair loss region follicles all result from the body's response to skull bone growth.

And the body then simply tries to restore hair growth back to normal by upregulating DHT into the hair loss region.

The high levels of DHT produced should help hair growth. But, since the miniaturized hair follicles have an inadequate blood supply, and skull expansion is progressive, DHT upregulation does not work.

The body then continues to increase DHT levels, but this only makes things worse (as pointed out in the first study).

It's very straightforward for scientists today to isolate individual genes, molecules, etc, and point the finger of blame at them as the root cause of various conditions and diseases.

But it's also very easy to become so focused on such minute details that it's easy to lose sight of the bigger picture.

Dihydrotestosterone has been given the main blame for androgenetic alopecia. And it's true that this steroid hormone is intrinsic to the development of this type of hair loss.