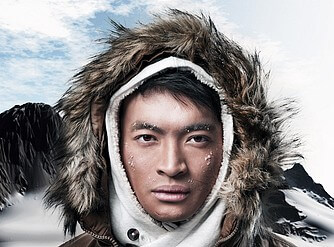 There is a very strong link between ethnicity and hair loss.

Caucasians suffer from it more than any other ethnic group. But the Inuit people (Eskimos), Native American Indians and Asians (including Chinese, Japanese, etc.) suffer from it the least (1).

This article explains how genetics and diet can account for the huge variations in hair loss between ethnic groups.

If you've read the skull expansion section, then you already know*¹ that I firmly believe this type of hair loss (androgenetic alopecia) is caused by the growth of certain skull bones.

*¹ If you didn't know that, then here’s an interesting email sent in from someone after they read my skull expansion theory:

"Hi Paul, I have to say it's refreshing to see research so thorough and I have no problems believing the theory. In fact I thought I would share this with you regarding your theory:

I am from Pakistan and I have always wondered why people in South Asia (Pakistan, India, Bangladesh) have such thick heavy hair and the majority of men do not suffer from hair loss.

And it just clicked when I read your theory… why people in Western countries experience such high incidence of male pattern baldness. Cheers, Ash."

Human skull shape is a genetically determined characteristic which can obviously vary quite considerably from one person to the next.

But it can also vary between race. Some ethnic groups tend to exhibit certain skull shape characteristics that are quite widespread among their people.

And that's important because some skull shapes are much more likely than others to develop bone growth during adulthood and, therein, start the hair loss process.

Which means that, by comparing the predominant skull shapes among racial groups, the reason for this correlation between ethnicity and hair loss can be more fully understood.

A study of ethnicity and hair loss: The Inuit people 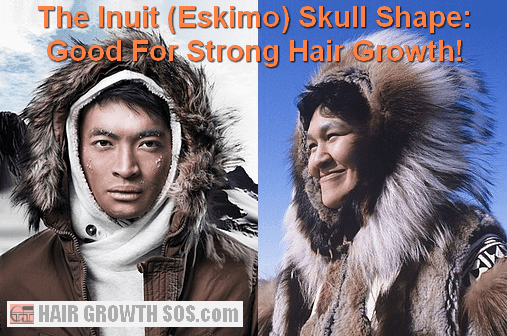 The Inuit face usually has a very flat, broad and steep forehead, like those shown in the photos above. These are all skull shape characteristics* typical of someone who maintains a strong hairline at the front

* Read my receding hairline article to learn about these skull shape characteristics.

Furthermore, a very broad forehead will often oppose bone growth and hair loss throughout the vertex (crown of the scalp) too.

The Inuit people live in small populations and isolated communities. This will restrict genetic diversity in offspring. Therefore, it follows that similar physical characteristics will be common. And the typical Inuit skull shape is one such genetic trait which will be passed on from one generation to the next.

It should also be noted that the facial features of both the Inuit people and Native American Indians share similarities with the Chinese. And hair loss incidence in most Asian populations is similarly lower than in Caucasians (2).

So there's no doubt in my mind that these ethnic groups support my belief that the genetic characteristic of skull shape is intrinsic to the development of this type of hair loss.

The Inuit diet is very high in fat and protein (it's mostly composed of seal, whale and fish such as salmon).

But, whilst protein is obviously extremely important for healthy hair growth (hair is almost entirely composed of a protein called keratin) I believe the significance of the Inuit diet lies in the quantity of fat they consume rather than the quantity of protein*².

*² In fact, it's been suggested (3) that, because of their very high protein intake, Inuit populations have lower bone mass relative to Caucasians (raising the risk of osteoporosis).

Clearly, a high fat diet is not normally associated with either good health or good hair growth.

And research (4) suggests that omega 3 plays a critical role in maintaining good health for the Inuit people by protecting them against obesity-related conditions such as diabetes and heart disease.

Omega 3 can also be of benefit to healthy hair growth. These are the reasons why:

*³ I believe a study of the Inuit people to record their brown fat levels would be an important measure for future research into this type of hair loss. Learn more about brown fat?

Another interesting fact to note about one of these ethnic groups is that the Native American Indians historically used saw palmetto as a tonic.

Saw palmetto is a small fan palm indigenous to North America, and the small berries it produces act as a DHT inhibitor.

High levels of DHT have been linked to prostate gland enlargement (BPH) and hair loss. So, since saw palmetto inhibits DHT production, many men today take it as a dietary supplement to treat either BPH or this type of hair loss.

Note though, the reason why the Native American Indians kept their hair is because of their skull shape characteristics, not the saw palmetto berries they ate.

Finally, other races and ethnic groups with historically low rates of this type of hair loss (such as the Japanese) are now experiencing a rapid rise. And the reason why, is thought to be largely due to their change towards the junk food diet enjoyed by the Western world (2).

Learn more about how junk food can make your hair loss worse?