Hair Loss and Heart Disease: A Warning for Men

Hair loss and heart disease are connected - a fact confirmed by a Japanese study. But could calcification be the reason why this connection exists?

This article reviews the Japanese study and suggests that calcification might be causing both conditions.

Hair loss (male pattern baldness) has proven itself to be highly complicated, with many studies over the years appearing to show connections it might have with all sorts of things ranging from certain genes to lifestyle factors.

And it also seems to be connected with other diseases too, including coronary heart disease (CHD).

The study (1) was led by doctor Tomohide Yamada, from the University of Tokyo, and was reported in the journal BMJ Open in April 2013.

It examined 850 previous investigations (from 1950 to 2012) that had formed a link between severe hair loss and heart disease, and then looked at six of these specifically.

This type of study is called a meta-analysis, which means it's a study of previous studies. And it accounts for what appears to be a very large number of men (37,000). However, the researchers did state that this was actually considered to be quite a small sized group.

The results of the study seem to confirm that there does indeed appear to be some sort of connection between hair loss and heart disease.

What I found most interesting, is that they reported a 32% increased risk of developing heart disease in men who have severe hair loss (i.e., over the whole crown of the head) when compared to men with little hair loss (e.g., receding temples) or no hair loss at all.

The Japanese team were not sure of the direct reason why the link between hair loss and heart disease exists, but the journal article does state:

"It has also been postulated that baldness is linked to CHD by mechanisms such as hyperinsulinaemia, chronic inflammation and increased peripheral sensitivity to androgens" (1).

However, I think there might be another possible factor: tissue calcification.

Can Calcification Cause Hair Loss and Heart Disease?

Coronary heart disease is caused when atherosclerosis develops in the coronary artery (this is the blood vessel that provides the heart muscle with nutrients from the blood it carries).

Atherosclerosis basically means that the inside walls of arteries change from being flexible and smooth, to stiff and all covered in plaque.

And this plaque is largely made of calcium.

The significance of this is that I firmly believe the mechanism for this type of hair loss involves skull expansion (skull bone growth). And the bone growth which the skull expansion process deposits is obviously composed largely of calcium.

So, I believe that this hair loss-calcium connection might also play a part in the link between severe hair loss and heart disease.

I also have a couple of ideas why the study found that heart disease only seems to exist in men with severe hair loss and not in men with receding hairlines (i.e., much less hair loss) or no hair loss at all:

1. The more severe your hair loss, the more skull expansion you’ll have. Clearly then, more calcium will be deposited in someone developing total baldness than in someone with only develops moderate hair loss. And more calcium in the skull bones might mean more calcium forming plaque in the coronary artery too.

2. Heart disease risk might be lower in men with receding hairlines simply because such men are likely to be younger: male pattern baldness is a progressive condition that can take years to develop, and often starts with a receding hairline. 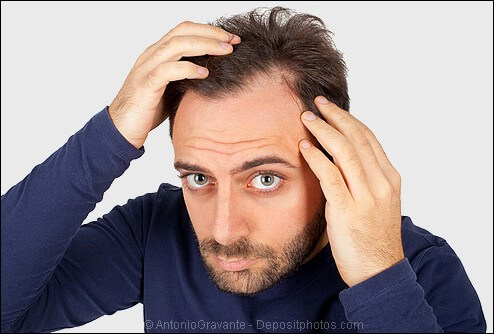 Some of the previous studies reported by the Japanese team did show that older men are more likely to develop coronary heart disease than younger men (the risk increase for bald men between the age of 55 and 60 was 44%).

So, in other words, it could actually be age that accounts for the difference in heart disease occurrence, and not the severity of hair loss.

It should also be noted that this increased risk of heart disease in those with severe hair loss is still less than it is for men who smoke (2) or are obese.

Coronary heart disease is, of course, mostly associated with lifestyle factors like smoking and poor diet. So, perhaps it’s not really surprising that the British Heart Foundation commented on the report that men should focus on their waistline rather than their hairline!

Presumably though, if you’re bald, obese and smoke, your accumulative risk of heart disease from all these factors put together is even greater.