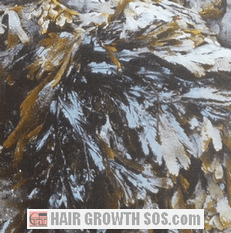 Eating seaweed for hair loss and hair growth problems might be beneficial by treating three conditions.

I tried sea kelp, bladderwrack and sea lettuce as a simple experiment (see how I got on further down the page).

From my research, I think there's some good news and some bad news about the idea of eating seaweed to tackle hair loss you should know.

Eating seaweed for hair loss issues might be worth a shot depending upon which type of hair loss it is. The three conditions below are probably the most likely ones that can be treated by adding seaweed to your diet.

This is the most common type of hair loss affecting men and women, and is usually known as male pattern baldness.

Seaweeds such as wakame (a type of kelp) contain certain substances called alginates, some of which can reduce fat absorption in the gut by up to 25%.

This has obvious weight-loss benefits for anyone with obesity, but might also benefit those with hair loss.

That's because, this type of hair loss has long been associated with the hormone DHT (dihydrotestosterone). And saturated fats in your diet can eventually get converted into DHT.

So, if eating seaweed decreases absorption of the fat you consume, that might mean less DHT production and less hair loss.

However, your body has the ability to convert any excess calories into saturated fat.

So, if you regularly consume way more calories than your body needs (and don’t burn it off through exercise), it may well be that the amount of alginate you get from eating seaweed simply can't cope with the sheer amount of fat your body produces.

But there's another way in which seaweed might help with this problem. Seaweed also contains iodine.

Iodine is a mineral that can stimulate thyroid function, a gland which boosts metabolism and so helps you burn off more of those excess calories you might be consuming.

Of course, whether or not iodine and alginate can together counteract the negative effects of too many calories and too much saturated fat is unclear.

Learn more about the link between saturated fats and DHT production.

Eating seaweed for hair loss caused by a deficiency in one or more of the nutrients seaweed contains is not a bad idea.

Seaweed contains all sorts of healthy nutrients beneficial for hair growth. These include the minerals iron, and iodine (as mentioned already).

So if you suffer from chronic telogen effluvium (which is caused by an iron deficiency) or hypothyroidism (which is sometimes connected to an iodine deficiency), it may well be that you can address your hair loss problem, at least to some extent, simply by consuming seaweed on a regular basis.

Other benefits of seaweed

Hair loss issues aside, seaweed also has other health and nutrition-related benefits:

Certain seaweeds can inhibit breast cancer and cervical cancer cell proliferation according to studies conducted in 2004 (1) and 2006 (2) respectively.

Brown seaweeds especially can regulate estrogen levels in the body. The antioxidants contained in seaweeds might also be involved in this anti-cancer effect.

the Bad News About Eating Seaweed for Hair Loss

Eating seaweed for hair loss conditions that might be tackled by its alginate content, minerals, or the many other health-promoting substances it contains, does sound like a good idea. At least in theory.

But in practice it might not be such a smart move. That's because some types of hair loss can be stubborn and present very complex problems to overcome. And they can also have multiple factors causing them (or at least affecting hair loss development and severity).

I firmly believe androgenetic alopecia is caused by skull expansion (which sounds simple enough). However, skull expansion develops due to certain genes and high levels of hormones such as DHT (as mentioned earlier).

The genes that determine skull shape dictate whether or not someone experiences skull expansion and hair loss. And DHT levels are also influenced by genetics (e.g., the 5-alpha reductase and androgen receptor genes).

So even if the nutrients in seaweed do help a bit, none of them can stop the hair loss process itself because they don't treat the underlying cause.

As for hair loss caused by hypothyroidism and an iodine deficiency, if you start eating seaweed to try and stop your hair loss by re-balancing your iodine levels, you won't really have a clue about how much iodine you're putting into your body.

One portion of seaweed contains way more iodine than your daily nutritional requirement (which is only about 140 micrograms).

And you can't simply blitz hypothyroidism out of your body by overdosing on iodine for, say, a few weeks either.

In fact, in contrast to the previous section, a clear association has been made between excessive daily iodine intake from seaweed consumption and thyroid cancer in postmenopausal women according to a 2012 study in Japan (3).

So what about eating just tiny amounts of seaweed for several months? Would that be OK?

Perhaps. But that might cause another problem: some seaweeds also contain quite a lot of sodium/salt* (for obvious reasons!).

So, if you already suffer from hypertension and try this idea long term, you might end up with your blood pressure shooting through the roof!

And all the while, you won't really know if the seaweed is helping you tackle your hair loss or not.

*Again, this is in contrast to the previous section which states that seaweed can decrease blood pressure. Obviously then, you might need to choose very carefully which seaweed for hair loss to use.

Chronic telogen effluvium was also mentioned as a possible type of hair loss that seaweed can treat. However, given the possible risks mentioned above, you'll almost certainly benefit more by taking a regular controlled dose of iron in tablet form.

So you see, for all three types of hair loss highlighted in the first section, simply eating seaweed to deliver a supply of nutrients to your body in the hope that it will miraculously reverse your hair loss and stimulate hair regrowth, is simply not going to work.

You could, of course, take iodine tablets instead. These probably won't be anywhere near as natural as pure seaweed even if the ingredients include sea kelp extract for example. That's because they'll have additives in the formula.

However, you should at least know exactly which nutrients you'll be taking, and in what quantities.

1. If you eat a junk food diet and think that taking supplements will somehow compensate for your bad eating habits, you’re most likely going to be wrong.

That's because, if you take a few small supplements, the mass of junk food you consume is likely to far outweigh any benefit they give. Certain types of junk foods can even strip some of the nutrients from your body.

2. There are many types of hair loss, and some of these, such as those that are autoimmune diseases or caused by mechanical factors, probably won't benefit at all from any food you eat or supplements you take.

3. Obviously you shouldn't take any tablets, or start munching on seaweed for hair loss conditions without consulting a doctor first. A doctor can help you identify which type of hair loss you have and how best to treat it.

If You Shouldn't Eat Seaweed for Hair Loss, Should You Eat It at All?

Eating some seaweed is most likely a smart idea. It certainly should help contribute to a nutritious, varied diet and general good health.

There's no doubt that seaweed is jam-packed full of nutrients (e.g., vitamins A, B, C, the minerals copper, magnesium, zinc, plus omega 3 fatty acids, etc) and so, quite rightly it deserves to be called a "superfood".

But it's probably best to consume only small amounts occasionally, not every day. And if there is some kind of hair growth promoting effect, then that's a bonus!

Have I Tried it Myself?

Yes. But I didn't eat seaweed for hair loss (that's something I have under control thanks to my own hair loss remedy).

I did so simply because my parents live near the coast and, having studied nutrition (a lot), I knew there were many potential nutritional and health benefits by eating it in small amounts.

So, as an experiment, I followed the basic advice for collecting and preparing it (see next section) and tried several types. Here's a very quick seaweed review for you from my own experience:

Note that these opinions are just my own (and also subject to me not being a very good cook!)

I also bought some nori seaweed sheets which I much prefer. If you do buy seaweed rather than harvest it yourself, look out for low salt versions, especially if you have heart issues or high blood pressure.

How to Harvest, Prepare and Eat Seaweed

Go to a clean beach (no sewage pipes close by!) when it's low tide (you can get this from a tide timetable) with some plastic bags and scissors or knife.

Once dry, you can store it for months. Before cooking it, soak the dry seaweed in fresh water for a few hours.

Or, of course, you could simply let someone else do all the hard work and buy some healthy seaweed wraps instead. This is my preferred option (as mentioned in the last section). 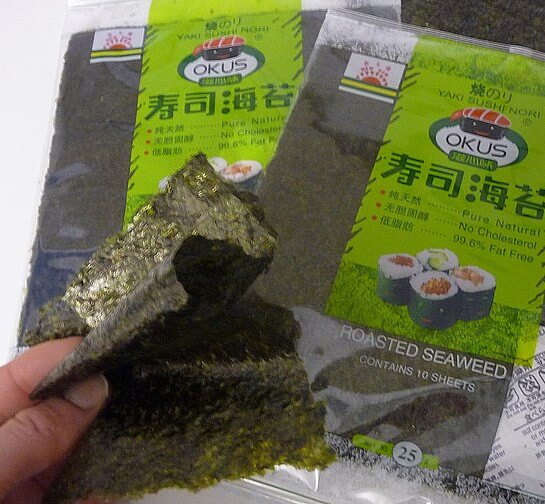 Some of the most well known types of edible seaweeds include:

Although seaweed would, no doubt, be a very healthy addition to your diet, if you were to simply start eating seaweed for hair loss and hair growth issues alone, you might end up being very disappointed.

Also, don't forget, it's far safer to consult with a doctor for any medical condition rather than simply self-treat.