There’s a lot more to androgenetic alopecia than just your genes.

The hormones testosterone and its derivative dihydrotestosterone are, along with genetic factors, responsible for causing this type of hair loss in 80% of Caucasian men and about 50% of women (1).

That’s a lot of people!

In fact, this is by far the most common type of hair loss affecting millions of men and women around the world.

So why does it affect so many? 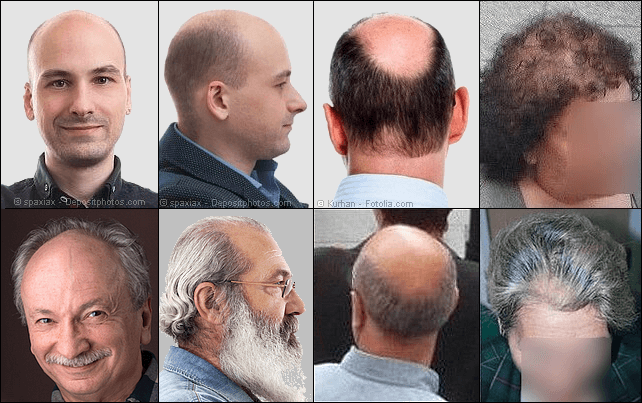 This page examines the causes of androgenetic alopecia (hormones and genetics) that can answer that question, and reveals some big problems with the current theory for this type of hair loss.

There’s also an in depth look at symptoms including the hair loss classification scales (Hamilton-Norwood scale for men and Ludwig scale for women).

Cause of Androgenetic Alopecia

There are three important hormone-related areas to consider:

1. How these hormones act.

2. How they fit in with the current theory.

3. How these hormones are produced.

1. How these hormones act

Testosterone and dihydrotestosterone (DHT) are androgens, a class of steroid hormones which have an anabolic effect (2). In other words, they make things grow.

Androgens influence bone growth (3) and muscle growth (4). And, of course, such growth is accelerated during puberty, especially in men.

So how can these hormones be linked to both hair growth and hair loss?

The current theory for this type of hair loss cannot explain this apparent paradox.

2. Hormones and the current theory

The current theory was developed after it had been observed that castrated men (eunuchs) keep their hair and not suffer male pattern baldness (7).

Clearly then, without normal levels of testosterone and dihydrotestosterone, hair loss will not develop.

All of which supports the current theory which states that higher dihydrotestosterone levels (along with higher levels of 5-alpha reductase and androgen receptors) are responsible for the miniaturization of hair follicles and the hair loss which then develops (1)(11). But exactly how dihydrotestosterone does this is not known (12).

So that explains how dihydrotestosterone fits in with this type of hair loss. But how is this hormone produced?

3. Hormone production: Food, hormones and hair loss are all connected

The very simplified pathway below shows how testosterone and dihydrotestosterone are formed in both men and women.

It follows then, that the more foods you eat which get processed into cholesterol, the more testosterone, dihydrotestosterone and, ultimately, hair loss you might develop.

So this is a possible connection that food could have with androgenetic alopecia. To learn more about the link between hair loss and food, read this page.

Several genes have been identified which are connected to androgenetic alopecia in some way.

These include the androgen receptor gene (10), the relevance of which was explained in the last section.

However, it's widely accepted that the genes which actually initiate this condition remain unknown (12). And, as such, the current theory simply states that hair follicles must be genetically "pre-programmed" for hair loss (14).

I believe the reason why these genes have not been identified is because scientists are looking in the wrong place. No one, it seems, is currently studying the bones of the skull that underlie the scalp. If they did, they should be able to confirm my own theory for this type of hair loss:

Most men suffer quite severe hair loss from androgenetic alopecia. This often develops as receding temples at the front or a bald patch at the back.

And when areas of baldness form both front and back, this usually develops into the full male pattern baldness profile. 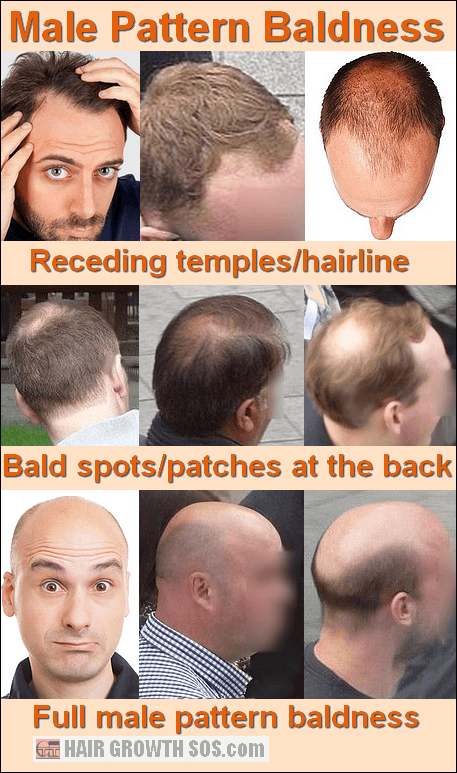 Although men can suffer extensive areas of baldness at the front, back or both, in some cases they might just develop thinning hair instead.

So why do all these different regions and varying degrees of hair loss emerge?

The current theory gives no real explanation. It simply states that the hair follicles must somehow be individually "pre-programmed" (14) in the affected region of the scalp but not in any other.

This, along with genetic factors, explains why most women do not develop areas of total baldness whereas most men do.

However, in the photo of the lady on the right, you can see that an area of baldness has developed in the frontal region, rather than evenly spread-out hair loss across the scalp. So, for some women, severe pattern baldness does develop. 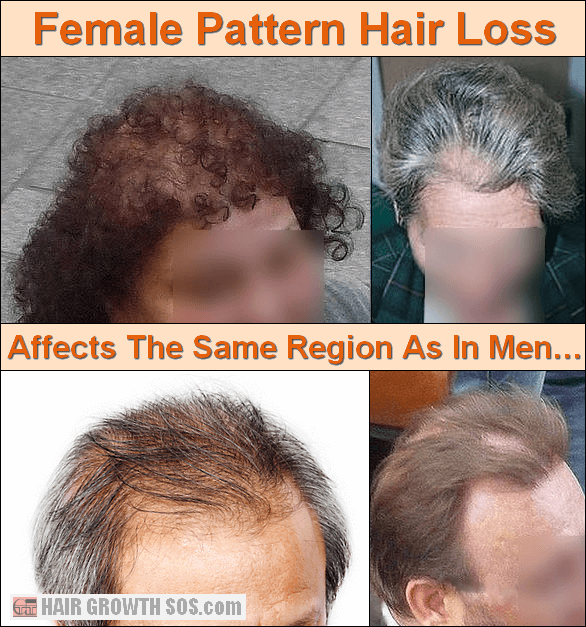 How to measure hair loss

The many different patterns of hair loss in men and women have been formally classified, as explained below.

For men, the Hamilton-Norwood scale is often used to gauge androgenetic alopecia development (17). From the diagram below, you can see that there are seven stages of hair loss, but also two variations:

Anterior - Addresses recession of the entire front hairline (i.e., not just the temples).

Vertex - Addresses early-stage baldness developing on the top of the head.

A further modified Hamilton-Norwood scale also exists whereby a stage II vertex version has been added (not shown in the diagram). 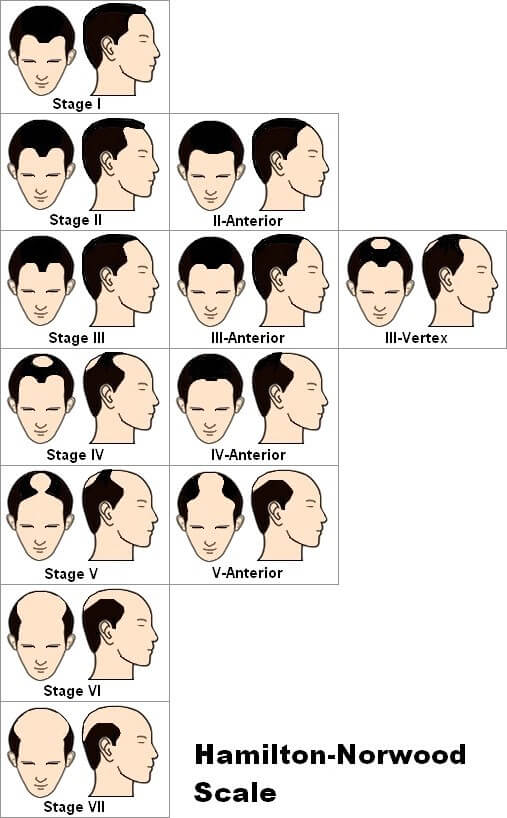 For women, the Ludwig scale (17) can be used to show androgenetic alopecia development and is largely based upon the width of a middle parting to indicate the extent of hair loss, as you can see from the diagram below.

However, there’s also the Savin scale (17). This is virtually the same as the Ludwig scale but has more detail of hair thinning and hair density.

Note: Both these versions are quite rare in women and are not shown in the diagram below. 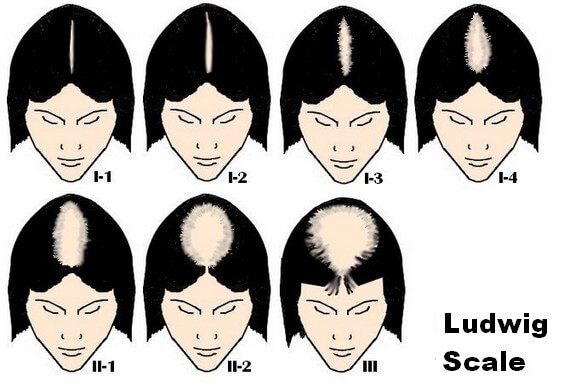 1. Notice from the Ludwig scale that the area of hair loss in women is exactly the same as it is in men whereby the sides of the head remain unaffected. This differs from telogen effluvium which causes hair thinning across the whole scalp.

2. The Hamilton-Norwood scale has more stages than the Ludwig scale. This reflects the greater variety and severity of hair loss in men than in women.

3. The first image in each diagram represents no apparent hair loss.

Many hair loss patients and practitioners find these scales useful. But, as you can see, hair loss classification can be quite complicated. And some studies have been quite critical of these scales (17)(18).

Personally, I prefer my own much simpler version, which can apply to both men and women:

Mild - You notice an increase in hair loss (e.g., comb, basin, pillow) but no one else does. Most likely to apply if your hair loss has only recently started.

Moderate - Thinning hair and reduced hair density makes your hair loss noticeable to both you and others. Can apply to rapid or medium-term hair loss.

Severe - Your scalp clearly shows through your remaining hair, and you might even be completely bald in some areas. Most likely to apply to long-term hair loss.

This page has highlighted some serious problems with the current theory for this type of hair loss. And these problems need to be solved before androgenetic alopecia is fully understood.

However, my own skull expansion theory does address all these problems. And, in so doing, I believe it fully explains how androgenetic alopecia develops.