When Will Hair Follicle Cloning Finally Be Available?

For many years, hair follicle cloning has promised to be the hair loss cure everyone’s been hoping for.

But will it eventually deliver? And if so, when? 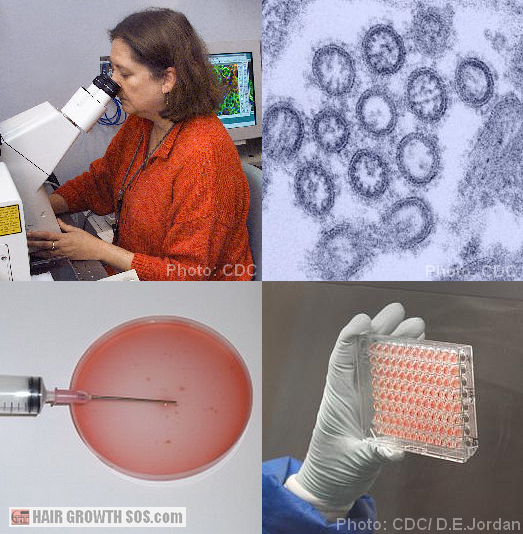 Hair follicle cloning is, without doubt, the most exciting area of hair loss research. That’s because this type of treatment can potentially regrow an unlimited amount of new hair for millions of men and women who suffer hair loss.

How Does Hair Follicle Cloning Work?

Studies have already shown that mice can grow new hair from stem cells (1)(2). So the science behind this idea is definitely solid.

Although widely known as hair follicle cloning, "follicular multiplication" or "stem cell hair transplantation" are more accurate terms. And the process is similar to a hair transplant, albeit that it’s cells rather than follicles that are collected from one part of the scalp and moved to another.

However, hair cloning has the huge advantage in that the cells collected are first grown (multiplied) in a lab to provide a virtually unlimited supply, whereas hair transplants are restricted by the number of donor hair follicles available from the back of the scalp.

These follicles are then dissected to obtain the stem cells, and incubated and grown in cultures for a few weeks to produce hundreds of thousands of new cells.

They then get injected into the hair loss region of the patient, and new hair should begin to grow after a few months.

If only it were that simple. Unfortunately, it’s not.

One of the main problems to overcome is knowing which stem cells to use.

Which stem cells should be used for hair follicle cloning?

There are two types of stem cell in the hair follicle: epithelial stem cells and dermal papilla cells (or DPC's) (1).

During the hair growth cycle, both epidermal and dermal parts of the skin are involved.

The cells that actually grow new hair come from the epidermis (epithelial stem cells). But cells from the dermis (the dermal papilla cells) signal them to do so.

From the hair stem cell migration diagram below, you can appreciate the complexity of this mechanism. 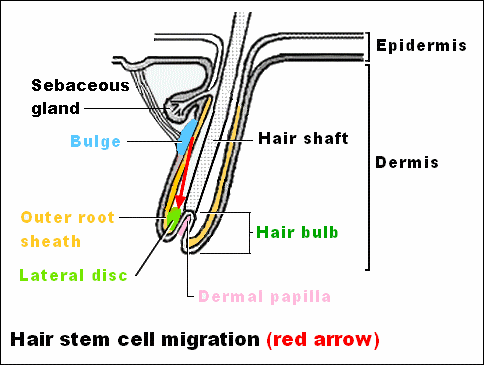 During anagen (the growing phase of the hair growth cycle) epithelial stem cells migrate down (see red arrow) from the bulge along the outer root sheath, settle just outside the hair bulb and form the lateral disc (3).

Then, during catagen, when the rest of the hair follicle breaks down, they turn into hair germ cells, which go on to produce a new hair in the next growth cycle from the dermal papilla.

So it seems that the previous hair cycle is responsible for the next through this stem cell migration. All of which raises the question:

However, a study in 2015 did state that dermal papilla cells cannot be obtained in necessary amounts and rapidly lose their ability to induce hair follicle formation when cultured (4).

So that suggests epidermal stem cells are the answer.

So, given that there are several cell types that form a follicle, this might suggest that stem cells are more useful than progenitor cells.

However, research has shown that bald scalps appears to be deficient in progenitor cells, but not stem cells (5).

Or, should both progenitor cells and stem cells be used?

As you can see, the complexity of it all is mind boggling!

Just take a look at all the other potential problems this challenging type of biotechnology has to overcome:

1. The new hair must be cosmetically acceptable to the patient – lots of thick, strong "terminal" hair with proper pigmentation*¹ rather than tiny "vellus" hair which is near invisible.

*¹ In 2007, a study (2) conducted on mice with wounded skin demonstrated stem cell-type activity which produced new hair growth at double the density of normal hair. But, interestingly, the new hair lacked melanin granules for some reason, and so grew without color (i.e., completely white).

2. Hair density and distribution – the new hair must be evenly distributed on the scalp, and not produce a dense clump of hair in one area and sparse growth in another. Patchy hair regrowth would not look good!

3. Angle of hair growth – the direction that the hair grows is especially important at the hairline. But new hair from the implanted cells might grow at any angle. This, of course, would give a very shabby looking result that's unacceptable to the patient.

Note: Problems 2 and 3 above might be solved if the hair follicle cloning process could somehow rejuvenate existing hair follicles (i.e., those that have been miniaturized by the hair loss process) rather than having to grow completely new hair.

4. Will the hair keep growing after the first hair growth cycle? The hair growth cycle can last up to seven years. So it's going to take quite some time to know for sure whether or not the hair produced is truly permanent or just a "one off".

5. If different cell types are needed, will the body know what to do with them all? In other words, will they communicate (through chemical messengers called cytokines) or would other substances be needed to control the new hair follicle growth? If they are, this extra complexity might add to the chances of it not working.

6. Since this whole approach involves rapid cell division, it could potentially cause skin cancer unless the growth mechanism is somehow regulated. And, as just highlighted, if other substances have to be introduced into the mix, this might make it difficult to control cell division. 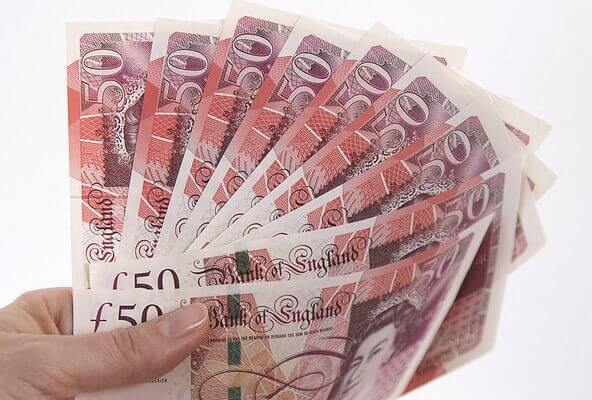 The sheer cost and complexity of hair follicle cloning research and development through to a commercially viable product means that very few companies got involved.

And those that did have had plenty of problems to face.

For example, back in 2010, insufficient results and inadequate funding forced the UK company Intercytex to cancel its phase III clinical trials and close down its hair regeneration business.

ARI is, perhaps, the best example to illustrate the high cost and high risk of hair cloning:

They were formed in 2002 by a Japanese corporation that was already pretty big within the hair loss industry. So that meant they had a huge amount of funding.

And just as well because, between 2002 and 2011, ARI spent about 100 million US dollars developing its hair cloning technique. All that money helped them become one of the world’s leading companies in this field of research of course.

But they still had big problems.

Back in 2002, ARI said it may take about five years before their cloning technique becomes commercially available. However, they did voice a number of concerns (some of which were included in the last section).

By 2011, ARI were conducting phase II clinical trials of their hair cloning process (which they named "Ji Gami") and reported the following:

Unfortunately, ARI then seemed to run into trouble (financial and/or unsatisfactory results). And, just like Intercytex before it, their phase III clinical trials did not take place.

I think there are two more potential problems that have been overlooked:

If a patient undergoes a hair follicle cloning procedure too soon, and the skull bones are still growing, any new hair follicles could be subjected to the same skull expansion process that caused the hair loss in the first place.

In other words, the new hair might develop into hair loss*⁴ too.

*⁴ And this might even explain why the hair density of some test subjects reported by ARI decreased after a year (see previous section).

Unlike say, cats and dogs, humans don't have a big seasonal molt. Instead, our follicles undertake the hair growth cycle independently from each other. This means that we are constantly losing and regrowing hair, and so, never really experience a massive shedding event during a short period of time.

But, if the hair follicle cloning process creates thousands of identical hairs at more or less the same time, does this mean that, at the end of the hair growth cycle (which is usually about three to five years) all that new hair will start shedding at the same time too?

I’ve not found any information on this, so it would be an interesting question to ask scientists working on stem cell research for hair follicle cloning.

It is, without doubt, disappointing that hair follicle cloning research still hasn't solved the many complex issues involved.

Clearly then, this future treatment for hair loss has still not arrived. And the lack of progress made even after so much research and expense must put the whole hair cloning concept into question.

However, millions of people are praying that this technology will, one day, miraculously regrow their hair. And such high demand for success can sometimes drive results.

So, despite the big barriers to overcome, for many with severe baldness, cloning new hair follicles does still offer the best hope for a real cure in the years to come. 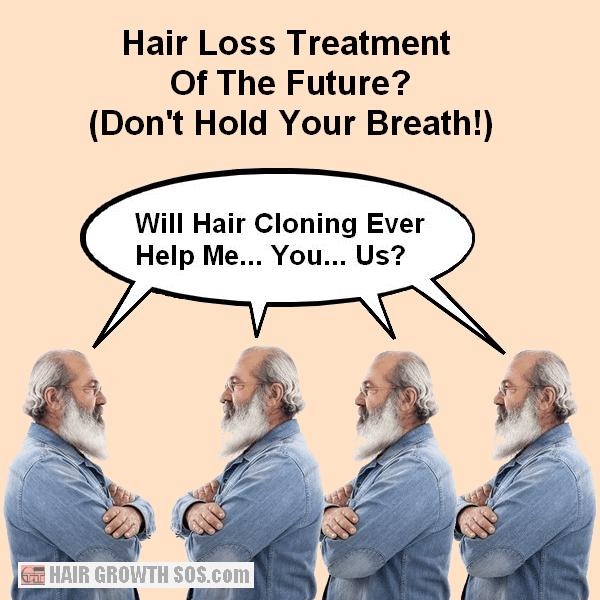