If skull expansion causes hair loss, how does it explain the success of hair transplant surgery?

This article answers that question.

It's a question that's occasionally asked by some people who are not yet convinced about skull expansion (skull bone growth) causing hair loss.

The point they make is that follicles from the back of the head (occipital region - see photo below) transplanted to the male pattern baldness (MPB) region can successfully grow hair.

But, if the weaker follicles in the MPB region are transplanted to some other part of the body (i.e., where skull expansion obviously doesn't apply) the follicles still don’t rejuvenate and start growing hair again.

So how does skull expansion explain that? 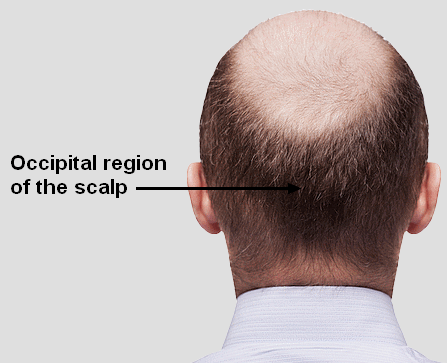 My answers to these questions address not only skull expansion, but also explains why some types of hair loss surgery can be more successful than others.

Most patients who get a transplant already have severe hair loss, which means that skull expansion has probably fully developed* in that region of the scalp. So further bone growth following the procedure is unlikely.

* Obviously the skull doesn't keep growing indefinitely. It does eventually stop. The extent to which the skull bones grow all depends upon skull shape.

And skull shape also explains why some people go completely bald whilst others lose hair in just one region (e.g., a receding hairline) or to a lesser extent (thinning hair).

So, if either the existing MPB region follicles can be rejuvenated, or healthy donor follicles (follicular units) can be successfully transplanted into the MPB area, there's a good chance that normal healthy hair can be produced.

However, hair transplant surgery is a complicated process. There's a lot more to it than just that.

Why Do Some Transplant Techniques Work and Others Don't?

Transplanted follicles are avascular (without blood vessels) and so, must successfully stimulate angiogenesis (new blood vessel formation) if they are to survive.

This leads on to three important factors that can explain why some types of hair transplant surgery are more successful than others:

Follicles transplanted from the back of the head (occipital region) can successfully stimulate angiogenesis because:

1. They are healthy and active, vigorously producing hair.

2. They are normal sized, not miniaturized. This means that, when inserted, they should be slightly closer to the micro circulation (blood supply) beneath the follicle than are the existing (miniaturized) follicles in the MPB region.

3. They have a small protective layer of adipose tissue.

Adipose tissue (fat tissue) exists as two types, white and brown. And research (1) has shown that this adipose tissue accumulates around the follicles of healthy, actively growing hair (such as in the occipital region), but not around dormant follicles (as in the MPB region).

It's been observed that hair loss surgery employing the Follicular Unit Extraction (FUE) method often lacks the protective layer of fat that other transplant techniques (such as Follicular Unit Transplantation or FUT) manage to extract from the donor site (2). And because of this, poor hair regrowth can result. 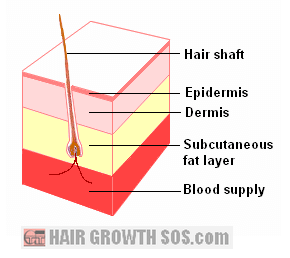 Also, studies have been made that link adipose tissue to angiogenesis (i.e., this fat encourages new blood vessel formation) (3)(4).

So, for all these reasons, it's highly likely that adipose tissue assists hair growth.

In this diagram you can see how hair follicles penetrate deep into the fat layer, and the blood supply beneath it, in a healthy region of the scalp.

Three reasons why MPB transplanted follicles might NOT grow hair

Follicles transplanted from the MPB region to some other part of the body may fail to stimulate angiogenesis because:

1. They are weaker and less active than follicles from the occipital region.

2. They are miniaturized and so, will be further away from the micro circulation when inserted.

3. They do not carry any supportive adipose tissue.

So, without angiogenesis, the transplanted hair follicles can't grow any new hair. The question concerning the transplantation of MPB follicles then, has nothing really to do with skull expansion. Rather, it's an issue with adipose tissue and angiogenesis.

Adipose tissue and angiogenesis are, of course, just two of many complex aspects of hair loss surgery.

And it's this complexity, as well as the uncertainty of success and the extremely high cost, which ultimately means that most people will choose not to have a hair transplant.

Will Hair transplant Surgery Work If You Are Very Young?

Hair transplants can sometimes be successful in those who are quite young. That's because, since skull expansion and hair loss can start as early as puberty in some people, their skull shape might be fully developed by the time they reach their 20's or early 30's.

But it should also be mentioned that when you're very young it's difficult to know what the degree of eventual hair loss will be.

That's why patients are usually advised to wait until they're older before having surgery, i.e., when the full extent of their hair loss and skull expansion is known.

Of course, the problem with waiting many years before having a transplant is that, by the time you're ready, there might not be much donor hair left!