Which is the Best Hair Transplant Technique? FUE vs FUT vs URFUT

This review explains why they are better than FUE (follicular unit extraction) and mini-micro grafts, including a cost analysis. You might be surprised to learn that the best technique is not the most expensive.

However, any type of transplant still has big issues.

Mini-micro grafts replaced the big plug grafts of the 1960's and 70's which contained 10 to 25 hairs per plug and gave the infamous "doll’s head" look.

But, because mini-micro grafts are much smaller and fit into little slits (i.e., rather than big round holes punched into the scalp) they give a much better result.

Mini grafts have 3 to 8 hairs each and are used to increase hair density. But, on their own, they still wouldn’t look completely natural. So, smaller micro grafts with just one or two hairs are used to create a better look at the hairline.

Mini-micro grafting is still available. But, whilst a single operation is quicker and cheaper than the new techniques, multiple operations are often needed. And that means multiple scars from where the donor scalp tissue is obtained.

As with mini-micro grafts, donor hair is obtained from a strip of tissue at the back of the scalp.

* Scalp hair grows naturally in tiny bundles called follicular units, where each unit contains between one and four hairs.

So, since follicular units are smaller, the maximum possible number can be produced from any given amount of donor tissue.

This means that more can be transplanted in just one session, and they can also be placed closer together in the recipient area (approximately 20 units per cm²). All of which should allow the surgeon to create a very natural looking result.

Microscopic dissection also allows follicular units to be removed from the donor strip without being damaged. This is very important because it increases the likelihood that they will successfully continue to grow hair in the new location.

URFUT uses even more powerful microscopes and smaller blades than FUT. And this allows even smaller follicular units from the donor strip, and smaller incisions in the recipient area.

It also means that the density of units produced can be twice that of FUT (about 40 units/cm²) giving a result that’s virtually undetectable.

However, whilst just one surgery session may be needed to produce a full, natural look to the hair, the extra precision needed requires even more surgeon skill and session time to be successful.

In FUE, follicular units are extracted one-by-one using tiny punch tools or "drill-bits" rather than cutting out a long single strip of donor tissue. This means FUE involves no stitches and no linear scar, so the healing time takes days rather than weeks.

The drill-bits do still create hundreds of dot scars, but these should be much less obvious than the long line scars you would get from the other techniques. So, with FUE, you might be able cut your hair really short without the dot scars showing. 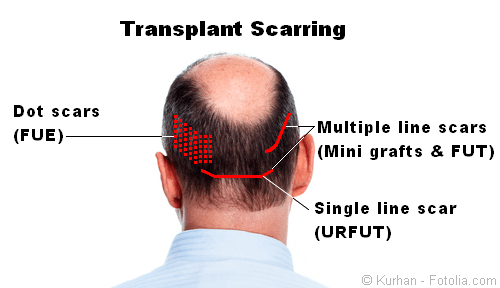 So Which One Is Best? FUE, FUT Or URFUT?

Despite the obvious cosmetic benefits of FUE, in terms of success rate, FUT and URFUT seem to be better.

There are a number of reasons for this, one of which concerns the protective layer of fat that appears to accumulate around healthy donor follicles.

It’s been observed that FUE can lack this fat layer resulting in poor hair regrowth (1).

But the FUT and URFUT methods do manage to extract this fat layer. The next page explains more about this important issue.

Also, whilst FUT can give line scars over 20 cm long, if the "trichophytic closure"* method is used, a much finer scar should be produced.

But even the best hair transplant technique still has big issues.

For most people, a hair transplant is very much a last resort.

And quite right too!

There are several problems with transplants. Here are just a few:

Whilst a higher density of units in the recipient area should give better results, there have to be gaps between each unit when they’re inserted.

But, if these gaps are too close (i.e., the unit density is too high), then there’s an increased risk that the transplanted hair will fail to grow. So, for example, with a density of 30 units/cm² you should expect at least 10% to be unsuccessful. 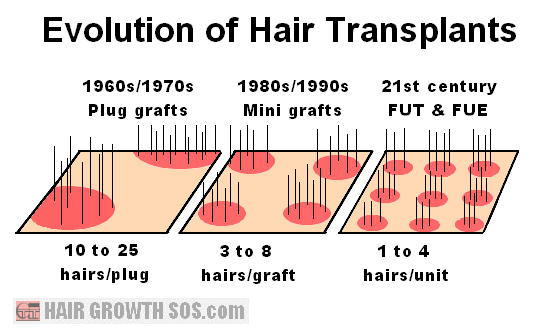 If someone were to wait until they’re older before having a transplant (as is usually recommended), they might have lost so much hair that there’s not enough donor hair to produce a decent amount of coverage and density.

Alternatively, since there's obviously only a limited amount of donor hair you can use, even if there were enough for one operation, there might not be enough for any subsequent operations you might need.

So, if the transplanted area grows well, but the hair all around it falls out, that’s not a good look!

When a patient runs out of donor hair, they might then start messing around with a hairstyle or concealer product to hide the balding areas.

And if they decide to shave their hair off, or wear it very short instead, the scars at the back of the head can become visible.

Obviously there are other major issues with hair transplants too.

So whilst FUT and URFUT might be the superior hair transplant choices in this review, that certainly doesn’t mean that they are recommended.