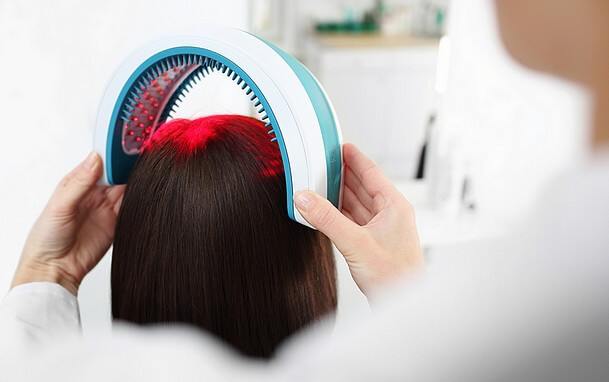 There are seven potential problems you should know about which might mean this form of therapy does not restore your hair.

For a very long time it’s been known that natural sunlight can benefit the human body. And this is especially true of light that’s at the red end of the spectrum. So that’s the reason why lasers used in hair loss treatment emit red light at wavelengths which are believed to stimulate hair regrowth in one or more of the following ways:

1. Reducing inflammation (note: taking turmeric and curcumin might be a more effective way to reduce inflammation).

3. Inducing vasodilation (widening blood vessels) which then increases blood flow and the supply of nutrients to the hair follicles.

Studies have shown that shining red light treatment for hair loss can induce significant hair growth in both men (1) and women (2).

Laser hair regrowth treatment is aimed towards those who have only just started losing hair or developing thinning hair, and not really for anyone whose hair loss is already severe.

However, since laser hair therapy also has a skin healing effect, it can also be used to help the scalp recover following hair transplant surgery.

Regardless of what you call it, using lasers for hair loss is complicated and costly. It’s not just a question of getting a clinic to simply shine red light on your head for maybe 30 minutes, twice a week.

As you'll see below, there are several factors to think about before you go ahead and give laser hair growth treatment the green light.

The wavelength generally said to be of most benefit for hair regrowth is approximately 650 nanometers (1)(2), which is visible as red light (as you can see from this image).

However, some companies use slightly different wavelengths in an attempt to improve hair regrowth even more.

Laser light is coherent – the light waves do not scatter because they’re "in phase" with each other. This gives a concentrated beam of light. Other types of light, like LEDs, are non-coherent (or incoherent) – their light particles (photons) are not in phase and so will randomly scatter as soon as they leave the light source.

However, lasers appear to lose their coherence when they enter the body, and this has led to uncertainty about whether the argument for using lasers rather than any other light source is flawed. Also see point 5 (Power level) below.

Most lasers have very low divergence. This means they produce only a single point of light and don’t spread out and "dilute" the radiation they emit as does diffused light (such as the LED in the diagram below).

This means that they can target specific areas of the scalp more efficiently and so, might work better.

However, it also means less coverage. And this can make the total duration of treatment to treat the whole scalp much longer unless the laser device has a high number of laser diodes or uses diffused lasers.

Diffused lasers have a greater divergence which makes them safer and gives more coverage. And the total duration of treatment can be reduced depending upon other factors such as how strong the lasers are.

Some consider pulsed lasers to be more effective for tissue healing. But a continuous wave laser works well at reducing inflammation (something that's also been associated with hair loss).

So which type works best for hair regrowth?

Another thing to consider is that some pulsed lasers used in laser hair removal treatment seem to get converted into thermal energy more efficiently than continuous lasers, and so can "kill" hair follicles more effectively.

So, if you use a pulsed laser device, you might end up suppressing your hair follicles rather than stimulating them!

Power is measured in milliwatts (mW) and all lasers used for hair loss seem to be 5 mW. However, there's some debate as to whether or not the lasers used for hair restoration can penetrate the skin’s so called "optical barrier" without immediately diffusing into scattered light.*

* If it does scatter, that means any other type of red light like LEDs (1)(2)(3) might be just as effective (and much cheaper and safer too).

Some say it all depends on the power output, whereby the more powerful a laser is, clearly the deeper into tissue it will reach. But obviously both laser comb manufacturers and clinics have to make sure that their devices won’t harm the patient.

That would definitely be bad for business!

So that could mean there’s a compromise on laser power level in hair regrowth therapy which might actually be less than optimal.

Your skin type might also affect what dose is optimal for you – skin color and tone can obviously vary from person to person.

So, does laser light penetrate darker skin as well as it does with lighter skin?

This factor certainly affects the success of lasers for hair removal. But companies selling laser combs for hair loss treatment do not even seem to mention this on their websites.

If your hair loss is minimal, or your hair has only just started getting thinner, then it makes sense that your hair follicles are still in a healthier state than someone with severe or rapid hair loss. So this factor could influence how much laser therapy your scalp really needs.

What if Laser Hair Loss Therapy Does Not Work?

Supposing you try laser hair growth treatment only to find that results are disappointing, or not as good as you hoped?

You might then consider adding to the complexity (and expense) of your hair loss regime. For example, using copper peptides (such as Folligen or Tricomin) in combination with laser hair growth treatment has been shown to enhance results (3).

This review has shown that laser hair growth treatment is full of variables and uncertainties. And I would have thought that such uncertainties would be enough to put most people off the whole idea, let alone the huge cost involved.

But if you’re still thinking about trying laser therapy for your hair loss, read the HairMax LaserComb review. It asks whether laser combs really do work, compares clinics with use-at-home products, and gives four more factors to think about.