Saw Palmetto Side Effects: Is This Hair Loss Herb Safe?

It’s ironic isn’t it? You don’t want to risk using Propecia, but then suffer saw palmetto side effects instead.

This article explains the possible side effects from using saw palmetto to treat hair loss, and what the risks are for men, women and children.

Is Saw Palmetto Safe for Women?

The drug product Propecia (finasteride) carries a warning that it shouldn't be used by women. Any pregnant woman (or woman likely to become pregnant) who comes into physical contact with finasteride, runs the risk of causing sexual defects in her unborn baby if it’s a boy (1).

Saw palmetto is often said to be a safe, natural alternative to finasteride. But it does appear to work the same way - by blocking DHT (dihydrotestosterone). And that means it's also likely to have the same side effects as finasteride.

Obviously then, if a pregnant woman were to take saw palmetto, she may be running the risk of blocking DHT production in an unborn baby boy and causing side effects as he develops in the womb.

This risk from saw palmetto in pregnant women has been made known (2). However, despite this, many saw palmetto products do not state "for men only". 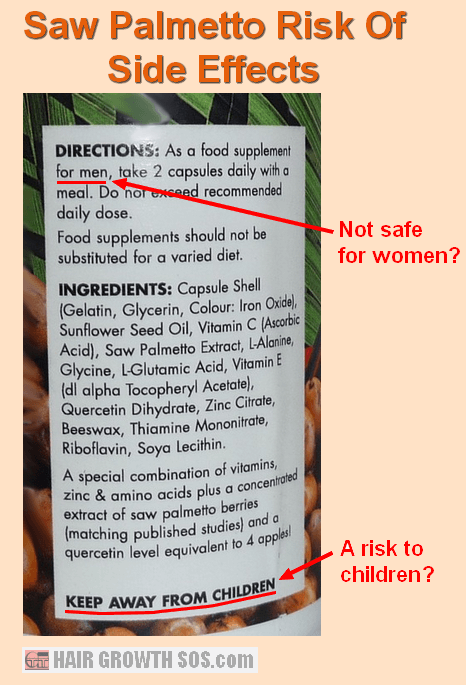 Complexity and Uncertainty for Men

This potential problem concerns the current uncertainty surrounding abnormal prostate gland growth. The sheer complexity of two prostate conditions might suggest that taking saw palmetto may amount to meddling around with something we don't yet fully understand.

Some studies have shown that saw palmetto berries might be effective against prostate gland growth (benign prostatic hyperplasia or BPH*) (3) and prostate cancer (4).

* BPH is an uncomfortable condition that generally affects older men whereby an enlarged prostate gland can interfere with urinary action and lead to further health problems which, unfortunately, can include prostate cancer.

Prostate cancer can develop in numerous ways. And these include prostate cancer cell lines which have been linked to androgens such as DHT. DHT in particular has been implicated as being largely responsible for abnormal growth of the prostate (5).

So, by reducing DHT availability, a reduction in prostate gland size can occur, thereby relieving the symptoms of BPH.

There are three possible ways in which saw palmetto might be able to help:

Since saw palmetto extract might be able to reduce symptoms of BPH, this raises the tantalizing prospect that saw palmetto can benefit men with hair loss too (6).

Given that DHT has been associated with both prostate problems and hair loss, it makes sense that saw palmetto might help tackle hair loss the same way it appears to help the prostate gland.

But the effectiveness of saw palmetto treatment for hair loss is subject to a lot of conflicting information (and disinformation) out there.

Here are just some of the contradictions and confusion surrounding the use of saw palmetto for hair loss:

*¹ Note that "serum" relates to the part of the blood excluding the red and white blood cells and the blood platelets. Other research from 2008 (12) appears to show that a dietary supplement of saw palmetto and astaxanthin can reduce "blood" levels of DHT.

*² These differences might mean that any side effects experienced from taking saw palmetto will not be exactly the same (or perhaps not as extreme) as the side effects from finasteride. Saw palmetto is, after all, a naturally-occurring herb. So, although it's often taken in a concentrated form, you might still expect it to be safer than a drug product.

I believe one other reason why saw palmetto is known to be so effective against prostate problems but is much more questionable when it comes to hair loss is because hair loss is caused by skull expansion. And I’m pretty sure skull expansion doesn’t affect the prostate gland!

So, with all these uncertainties surrounding both the complexity of abnormal prostate growth, and the way in which saw palmetto may or may not work, surely this suggests that there could be some degree of risk for those men who use saw palmetto for hair loss.

As already mentioned, the main reason why men and women use saw palmetto hair loss products is to try and reduce DHT levels in their hair follicles. The idea being that, since DHT is involved in the hair loss process, lower DHT levels should help.

After some unknown period (weeks? months?) this extra shedding might reduce back down again as DHT levels finally start to stay low.

But this can lead to another problem:

Estrogen Instead of DHT?

Some research suggests that saw palmetto can decrease estrogen levels (2)(12).

However, other research states that finasteride and testosterone together can significantly increase estrogen (estradiol) levels (14). So this might suggest that saw palmetto can do the same.

By blocking the enzyme 5-alpha reductase from converting testosterone into DHT, it may well be that another enzyme (aromatase) can convert some of that surplus testosterone into an estrogen called estradiol instead.

Here’s a very simplified look at the normal, predominant hormone pathway for men and women:

Note: both men and women naturally produce testosterone and the enzymes 5-alpha reductase and aromatase.

So if excessive levels of testosterone get converted into estrogen in men, that can be a problem because, like DHT, the role of estrogen is to promote growth.

And gynecomastia (breast enlargement) in men due to high testosterone levels getting converted into estradiol has been reported (12), as has the possibility that finasteride may induce breast cancer in men (15).

Furthermore, in 2011, the FDA issued a warning that men using DHT blocker drugs (including finasteride) may be at greater risk of developing an aggressive form of prostate cancer.

So, since saw palmetto appears to act in the same way as these drugs, you might do well to avoid taking any type of DHT blocker, be it a drug or natural alternative.

You might not want hair loss, but you definitely don’t want prostate cancer!

Most people don’t experience any problems taking saw palmetto. But some do, and have reported the following (2):

Some websites also state that saw palmetto can cause sexual dysfunction in men (breast enlargement, impotence, etc). But most sites state that there are no such side effects.

But It Did Help the Indians

Despite the potential side effects of saw palmetto mentioned above, this herb has long been used as a health aid. For example, some Native American Indians used saw palmetto for urinary tract and prostate gland health. And many people today take saw palmetto supplements for the same reason (as mentioned above).

So, instead of riding on down to their local health food store, they just ate the berries.

And this would have probably given them a much smaller dose of the active ingredients when compared to men today, many of whom consider two 160 mg capsules of standardized saw palmetto extract to be an appropriate daily dosage for hair loss treatment.

But taking 320 mg every single day will clearly mount up to quite a considerable dose of the active ingredients over time. And overdosing on herbs can be like overdosing on drugs.

Whether or not Native American Indians suffered any side effects from eating saw palmetto berries, I don't know. But I do know that they didn’t suffer hair loss as much as Caucasians. And the reason why has got nothing to do with saw palmetto. You can find out why by reading this article.

Despite the uncertainties, many men and women desperate to solve their hair loss problem, try products that contain saw palmetto, and quite often do so as their first choice rather than the FDA approved drugs minoxidil and finasteride.

But, using saw palmetto for hair loss might still lead to the potential side effects as explained above.

If, having learnt all about the possible side effects of saw palmetto, you're still interested in trying this herb, you can compare some of the most popular topical and oral products containing saw palmetto in the hair loss products section: